Great Horror Films That I Will Never See Again

I’ve watched James Whale’s Frankenstein every year for the past twenty years. I recently re-watched all the Saw films in preparation for the final installment. I watched Dagon again over the weekend simply because it was released to Netflix’s “watch instantly” option. However, there are a few great horror films that I can safely say I’ll never see again. These are not “bad” films. They’re all important milestones in horror cinema that were worth watching, even if I’ll never watch them again. 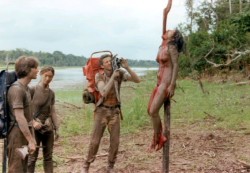 In terms of film history, this is a must-see for any horror fan, as it’s the prototype for films such as Hostel, Saw, and all the found-footage films that are popular right now. For all its grainy, trashy aesthetics, Cannibal Holocaust is actually far more intelligent and deliberate than it sometimes appears to be. In some ways, the film is a cogent parody of the Western world’s assumptions about native culture, as well as the problematic role of media. That being said, it’s a deeply disturbing film, largely because the director employs real violence to animals as an analog to the fake violence to humans. It’s incredibly gut-wrenching and effective, and also blatantly unethical. I’ll never watch this film again. 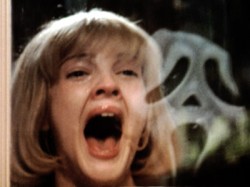 Let me begin by stressing that I like this film if for no other reason than it famously revitalized the slasher genre in the 1990s. It also made horror mainstream by using an all-star cast, and like every other teenage boy in the 90s, I loved every second that Neve Campbell was on screen. It also gave horror a then-needed dose of wit and tongue-in-cheek self-reflection. At its heart, Scream is a horror movie about horror movies. I suppose that being so ground-breaking and influential has a price, as every horror film that followed for a very long time had a similar tone and technique. I love Cherry Falls (a better sequel to Scream than the actual sequels) and the more recent meta-film Behind the Mask: The Rise of Leslie Vernon. Scream paved the way for both of these films. And I’m sure I’ll watch Scream 4 when it hits theaters, if only to reminisce about my younger days as a horror fan. But I’ll likely never watch the original Scream again, because all the irony and punch of it is long gone, thanks in part to the rise of the Scary Movie franchise, which thoroughly lampooned everything that was once pithy and subtle about Scream.

This movie had me cowering in my seat when I saw it in the theater. I’d never seen anything quite like it, as it was one of the first horror films to really make extensive use of shaky-cam, found-footage style film-making in a way that was more realistic and immersive than Cannibal Holocaust. But, like the meta-narrative style of Scream, all of this has been copied and rehashed to the point that its lost its effectiveness. I tried watching The Blair Witch Project again, hoping to recapture that feeling I had when I saw it for the first time. But the twigs tied up in a knot just seemed silly the second time, and the blurry, indiscriminate shapes and sounds were annoying instead of scary, and the amateur acting seemed puerile. Of course, it’s an important film, and it proves that film-makers should be innovative and try new things. But it also means that there’s no real and permanent substitute for having things like a polished script, professional acting, refined cinematography, and the other timeless elements of good film. If there’s another sequel to The Blair Witch Project that has all of those things, then I’ll watch it. Otherwise, I’m finished with this franchise. 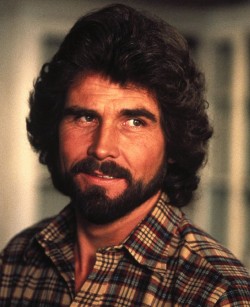 This is another film that scared the loving bejeesus out of me as a kid. This is probably because children think of their homes as being both the center of their world, as well as a very safe place to be. So there was something about the idea of a haunted house, with its dark and sinister inner room (the famous “red room”) that turned my adolescent mind upside down. For a long time, it made me afraid to go in the basement of my own house. I saw the film again as an adult and I had two reactions. It’s actually an incredibly slow and boring film, and James Brolin must have been the hairiest, manliest actor in the 70s. The dude belongs in a Brawny paper-towel commercial. I’m glad I saw this film as a kid, but now that I’m an adult, I’ll never see it again. 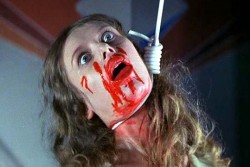 I’ve loved every Dario Argento movie that I’ve ever seen, including Suspiria. I’m even a big fan of Jenifer and Pelts, his controversial installments in the sadly defunct Masters of Horror series. Suspiria is a well-crafted, exquisitely paced, and beautifully shot film, with choreographed color palettes and carefully orchestrated music. But I’ll never see it again, because I really don’t need to. Argento keeps making the same movie over and over, whether he’s exploring the secret, evil world of dance, or the secret, evil world of the fur trade. They all look and feel about the same, so I’ll never watch Suspiria again, and wait for the next Argento movie instead.

I have the utmost respect for this movie. And I’m a little surprised myself that it’s on this list, as I could watch the original Night of the Living Dead every night of the week. And Dawn of the Dead is a smart zombie film with lots of important stuff to say. But I tried watching it again a while back, and, as much as it pains me to say this, it’s really kinda boring. I’d forgotten how slowly paced it is, or how there’s a long sequence of events that we have to muddle through before we get to the good stuff in the shopping mall. This might not be fair, but I also can’t help but compare it to Zack Snyder’s 2004 remake. It’s derivative, of course, of Romero’s work, and indebted to it in every way imaginable. But its pacing is perfect, the characters are all interesting, the tone and editing are contemplative but also relentless, and it has a soundtrack that includes the punk-rock poet Jim Carroll and the one-and-only Johnny Cash. What’s not to love? It’s the better film. And I’ll never watch Romero’s Dawn of the Dead again because of it.