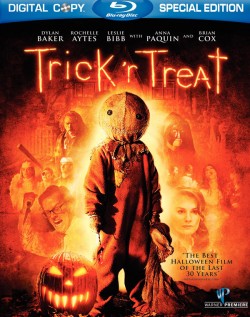 finished in 2007, trick ‘r treat has languished in release limbo, likely locked in the same dark closet as all the boys love mandy lane. passed over for a theatrical release, it was finally dumped to dvd this week with almost no special features (in an odd choice, only the blu-ray was given special features, including the commentary track). further, from what i’ve heard on twitter, it seems like warner bros. sent out an average 0.25 copies of the film to each store, since no one seems able to find a copy. given how it’s been treated by its studio, i don’t think anyone would blame you for thinking that trick ‘r treat was just another low-budget, crappy horror anthology dumped to dvd. however, you would be wrong.

it’s really a shame that the studio didn’t have more faith in trick ‘r treat and that it isn’t opening in wide release later this month for the halloween season. no film, not even the original halloween, has so perfectly captured the mood and atmosphere of the holiday. years from now, similar to how tnt shows a christmas story over and over again for twenty-four hours straight on christmas eve, you’ll be seeing trick ‘r treat shown on cable stations every year come late october. each of the the film’s stories are tied together by the mischievous trick ‘r treater sam (pictured on the cover), and i see him replacing ‘the great pumpkin’ as all hallow’s eve’s official mascot. in my house, anyway.

trick ‘r treat is not just a good horror anthology. with no disrespect towards creepshow, the twilight zone or tales from the darkside (nor to the little zuni fetish doll from trilogy of terror) ~ trick ‘r treat is the best horror anthology ever made. whether you’re looking at its sense of humor (perfectly dark), its cast (superb), its storytelling (clever) or its setting of mood (incredibly atmospheric), there is little you’ll find to dislike here. rent it, buy it or steal it… but seek this film out.