stacie ponder over at final girl has been doing her own unique brand of interviews with various horror blog writers, referred to as the “bloggenaire interviews.” much to my giddy excitement, today my answers to her ‘oh-those-are-so-stacie-esque’ queries were posted on her site. it’s not every day that you get featured on your favorite horror site, so at the risk of shameless self-promotion, here’s a link to my interview at stacie’s site (and i’ve also reproduced her q&a below). if you run a horror blog yourself and would like to take part in her questionnaire, visit this post for instructions.

Reading Corey’s answers, I found out some interesting things regarding the genesis of Evil on Two Legs, one of Final Girl’s oldest and raddest cyber-friends. SOME VERY INTERESTING THINGS. What I didn’t find out, however, is why he eschews capital letters so very much! Oh well, next time.


1) What’s the key moment that led you to click that “Start Your Blog” button?

Eo2L originally existed in 2000 as a more traditional website with reviews and articles dealing with the slasher genre, organized by film. It lasted for a few years until I shut it down, due to a lack of time to devote to it. (The following is absolutely true, and not just me brown-nosing.). In 2007, I came across finalgirl.blogspot.com and began reading it chronologically from the beginning, leaving comments as I went. I was impressed by the combination of a highly personal and conversational writing style with the focus on a singular subject matter (horror films). Days later, when I got caught up to the current post, I decided that, with the help of my best friend Jon, I was going to resurrect Eo2L as a horror blog focusing on slasher films. So yeah. Basically, I ripped you off. Sorry ‘bout that.


2) Please describe your blog in no more than 3 sentences. You must include the words / phrases “morbid”, “aesthetic”, and “electromagnetic”.

Like most horror blogs, Eo2L is a contradiction. Devoted to an undeniably morbid topic (the cinematic portrayal of young adults being murdered by masked psychopaths with sharp objects), our site approaches this subject matter with humor, passion and a cartoony visual aesthetic. Many of the anagrams for the name of our site (e.g., Loveliest Gown, Legit Snow Love), like many of those for the word electromagnetic (e.g., Arctic Melee Tong, Tentacle Crime Go!, Cancer Gem Toilet), make little sense but would be great titles for the prequel to John Carpenter’s The Thing.


3) Bearing in mind that opinions are subjective (except mine because I’m always right), do you enjoy movies that are generally considered “bad”? Why or why not?

The biggest crime a film can commit is being dull. I enjoy almost any film that holds my attention, regardless of why. It’s fantastic when that reason is talented filmmaking, but I can’t deny that I’m mesmerized by inept storytelling, nonsensical plots and bizarre direction (e.g., H2 or anything by Dr. Uwe Boll). 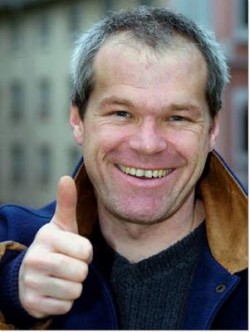 4) Did you know that there exists one variety of carnivorous parrot? It’s true. They live in the mountains of New Zealand, and they eat the fat surrounding the kidneys of sheep- WHILE THE SHEEP ARE ALIVE. It’s horrible.

This sounds like a decent setup for a made-for-television SyFy thriller. Jimmy Buffett could direct, star in, and write a song for it. Maybe call it Carnivoritaville?

5) What’s the one- ONE- horror movie you love so much you want to stick it down your pants?

Is that the front of the pants or the back? Depending on which, it’d either be Halloween (1978) or Friday the 13th part VII: The New Blood. 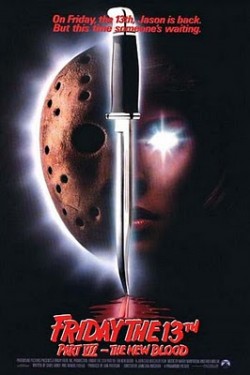 Not a huge fan, but this question prompted me to look her up on IMDB. Did you know she’s the only female in John Carpenter’s The Thing? She’s the voice of the chess computer. That’s the kind of juicy role you can only get by being married to the director.

Corey’s time in High School was…well, it was weird.

7) Why should people bother to read your blog?


8) Where does Jigsaw get all the money he needs to build all those traps and buy all that warehouse space? Better yet, does he have some sort of engineering background? He must, right, if he designs all that crap?

While they quickly changed their age requirement and put strict restrictions on what could and could not be asked for, the Make-a-Wish Foundation grudgingly granted his wish for 100 abandoned warehouse real estate holdings, a dedicated team of electrical and mechanical engineers, 10 pig masks and (I quote) “a spiffy red/black cape that doesn’t make me look fat.” 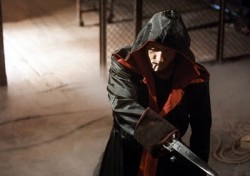 9) Several theories regarding the reasons why people would subject themselves to watching horror films (when they’re so, you know, traumatic) exist. Which is closest in line with your feelings on and reactions to the genre? Feel free to elaborate. Or don’t, see if I care.

a) RELIEF THEORY: The unpleasant feelings of distress cause more stimulating feelings of relief when the unpleasantness passes- the stressed arousal caused by fear becomes pleasurable arousal later on.
b) CONTINUOUS REWARD: The excitement felt during the film is the appeal in and of itself.
c) SOCIAL THEORIES:
1) Stereotypical gender roles are reinforced: men act as protectors, women need protection.
2) Violating social norms- watching “deviant” entertainment- is exciting.
3) Experiencing heightened emotions with others makes us feel like we “belong” and we’re truly part of a group.

Horror films are, in many ways, comparable to roller-coaster rides. You get all the positive aspects of a traumatic experience (excitement, adrenaline, etc.) without the inconvenience of actually dying. There’s also something to be said for the idea that horror films are a way to deal with our fears in a controlled setting that, logically, offers little danger but emotionally feels quite real. Death is, of course, the ultimate fear – and maybe horror films allow us to come to a better understanding of it. Or, less optimistically, perhaps they strengthen our own personal denial of death since we experience it through the characters in films over and over again, and yet are still fine once the credits roll.

1981 is the bee’s knees. In addition to being THE year for slasher films (Halloween 2, My Bloody Valentine, Friday the 13th part 2, The Burning, The Prowler) 1981 also gave us Saturday the 14th. Case closed.

11) What the eff is up with those French and their crazy horror flicks?

I know, right? It’s like they took a film canister and filled it with The Texas Chainsaw Massacre, a bunch of croissants, two servings of crazy and ten servings of awesome and shook it all around. 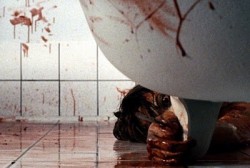 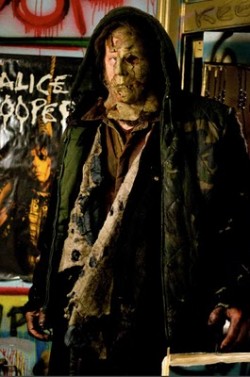 Love does indeed hurt. So do knives. And sometimes, love hurts just like a knife.

14) What are your funereal wishes?

Um, eternal life? Unless that involves sparkling in the sunlight.

15) Why do I have such a fondness for Shelley Hack? It’s not like she’s really done much to deserve it, but there it is.

You’re a weirdo. In a good way.


16) You’re on a sinking ghost ship that’s being piloted by a witch. What are your last words?


17) Asking about your funereal wishes and your last words means nothing, I swear.

That’s a relief. I was beginning to wonder.


19) Weren’t you glad when THAT JERK in THAT HORROR MOVIE got what was coming to him?

Dude, that was Sa-WEET.

Like most Gen-Xers, I loved the 1980s. And I’m pretty fond of our current one, actually.


21) Would you rather be:
1) a vampire
2) a witch/warlock
3) a werewolf
4) a Frankenstein (and yes, I know technically it’s “Frankenstein’s monster” but “a Frankenstein” sounds better)
5) a Jaws


22) If you could turn back time- if you could find a way- would you take back those words that hurt me, so I’d stay?

What am I supposed to do, sit around and wait for you? And I can’t do that-there’s no turning back. I need time to move on, I need love to feel strong ’cause I’ve had time to think it through. And maybe I’m too good for you. Ohh. Oh. 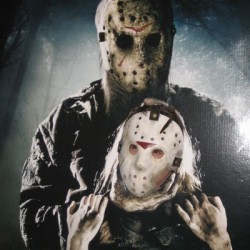 I’d like to caption this with “Which witch is which?”, but that wouldn’t make sense.

23) What’s something you want people to know about you or your blog that I didn’t ask?

If we’d known how many leg fetishists Google would mistakenly filter to our site – we might have chosen a different name.