As a Format, VHS Kinda Sucked 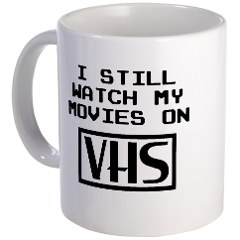 last night i caught bits of a twitter debate about the relative merits of vhs tapes versus dvd. back in the day i had a gigantic vhs collection, and i look back on it with fond nostalgia. however, around 1999, i welcomed the arrival of our new digital overlords with open arms and have never looked back. while i don’t own a vcr, i think i still own 2 or 3 vhs tapes from the hundreds (maybe thousands) i once had (including TOM SAVINI’S SCREAM GREATS) — but apart from a few nostalgic hold-outs, i gave up on vhs years ago.

i do miss the days of the mom-and-pop video stores with their huge, over-sized vhs boxes and titillating cover art. far be it from me to condemn someone who continues to collect vhs tapes and even prefers (gasp!) to watch them over more modern formats. everyone’s got their thing, and if that’s yours — more power to you. however, while i may be nostalgic for my teen years spent browsing the aisles of videovision and carbonated video, nostalgia is where my affection for vhs ends because truth-be-told, i love dvd and blu-ray with a warm, gooey love that i can barely keep appropriate in public. with that in mind, i present to you a list of reason why, when properly divorced from nostalgia, it’s clear that vhs sorta blew.

while there is actually such a thing as a dvd rewinder, they’re not strictly necessary. after years of rewinding and fast forwarding vhs tapes and, in some cases, even paying a $1 fee for failing to remember to “be kind and rewind” at your favorite video store — the concept of not needing to rewind a movie might come as a bit of a shock to you. for those of us that were big fans of the slp/ep speed setting (giving us six, and in some cases, EIGHT hours of recording time on a single tape), countless hours spent shuffling spools of black shiny tape from one little plastic ring to another have been wasted… hours we will never get back. thank the gods for digital media and it’s ability to jump from one section of a film to another almost instantaneously. how we ever lived another way, i will never understand.

while vhs tapes did occasionally have ‘making-of’ docs and the like, it was nothing compared to what we have now. with documentaries, subtitles, multiple soundtracks, commentary tracks, etc. being almost standard for any film release — it’s hard to argue that vhs wasn’t a hobbled format. some of these (like subtitles) are so insanely useful and standard that they’re not really even ‘special’ anymore — they’re expected. personally i’m a huge fan of commentaries, so when a disc features one (or, in some cases, as many as FIVE), the amount of value i get out of owning a disc increases phenomenally. the only vhs i recall having a commentary was an edition of EVIL DEAD II which, of course, had to come on two tapes — one for the film with the original soundtrack, and one for the commentary. 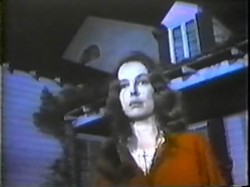 if the goal of watching a film at home is to attempt to replicate the theatrical experience, then it’s obvious why dvd has replaced vhs as a format. with 5.1 (or more) digital surround sound and crisp, clean video — vhs didn’t really stand a chance. while i would be the first to admit that there are horror films that might genuinely be more effective on a grainy vhs tape (HALLOWEEN leaps to mind), in general the increases in video and audio quality of modern formats is a blessing for film buffs. if you really want to replicate the vhs experience but don’t want to dig out your vcr, simply put cotton in your ears and try not to look directly at the television while squinting really hard. that should come pretty close to watching the same film on vhs (and may even give you a headache of the same variety). 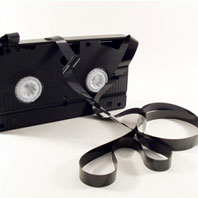 i don’t know if that long plastic piece on the back of a vhs that protected the magnetic tape has a name, but i’m sure you remember numerous occasions where that little fucker broke off and you were left with a semi-functional movie, a long, useless piece of plastic and a small, silver spring. weren’t those the days? you also likely remember when the tape would get all tangled in the heads of your vcr, and the particularly horrible “sckrunch!” sound your vcr would make as it ground to a halt while shredding the film you were about to watch. if you were really lucky, that tape was a rental so then you (or, more likely, your parents) had to pay the video store for damages ($99.99 for a copy of GATOR BAIT II, my ass!).

yeah… dammit, i sure miss that.

there’s nothing quite like a format where you know that every time you watch a particular movie, the quality will degrade. admittedly, it took quite a few viewings… but every time you watched that bootleg of PHANTASM II you taped off hbo, it got just a little bit grainier. i remember trying to watch a vhs copy of SUSPIRIA a few years ago that basically looked like static vomited on by a preschooler who had just eaten a box of red and blue crayons. which is exactly how argento intended it to look, i’m sure.

taping over the tab

for many of us, our first experience with engineering and problem solving came from figuring out how to use our sister’s store-bought exercise video as a blank tape to record HALLOWEEN III. the vhs format came with a bit of particularly devious copy protection known as “the plastic tab.” if the tab was missing or broken off, there was absolutely no possible way to record anything on that bastard. unless, of course, you had a piece of tape, a crumbled up piece of paper, some lint, or really anything at all. 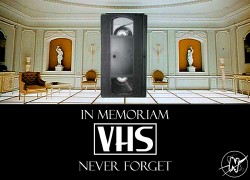 i was never really sure why in the early 80s the over-sized vhs boxes were popular because vhs tapes are, in and of themselves, already obnoxiously large. i suppose vhs worked ok for a single movie, but can you imagine trying to have the entire six-season run of LOST on vhs? you’d have to rent an apartment just for it. i remember having a large portion of the first few seasons of THE X-FILES on vhs. it took up, like, half the damn bedroom. 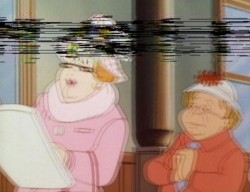 without a doubt, the thing i will miss least about vhs tapes is that obviously-satan-engineered dial/button on the front of the vcr simply labeled “tracking.” like television rabbit ears but so much worse, messing with the tracking could become a constant irritation throughout an entire film if you were dealing with anything but a brand new tape. watching that thick line of distortion crawl across the screen as you moved the dial and then, just as you thought it had vanished and you’d gotten everything perfect, watching it pop up at the other side of the screen… yeah, that was an eff’ing blast.

so, yeah. that was vhs. it was great while it lasted but, ya know… it’s probably best that we’ve moved on. like an old girlfriend, we can think back on her with fond remembrance… but let’s not forget that if she were still around, she’d be quite the bitch to deal with and we’re probably better off without her.

13 Responses to As a Format, VHS Kinda Sucked