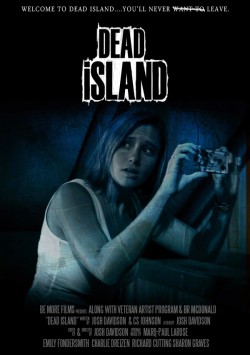 two things that i love dearly and that have increasingly become part of my daily life in the last year or so are twitter and my iphone. i use the two in tandem to keep track of horror related news and gossip and to make new friends in the horror community, but i’d always thought these technologies were limited to talking about horror movies — not making them. well, i was wrong. josh davidson (who you may remember from PERKINS’ 14) is a fellow baltimore/dc area horror-buddy i met through twitter who keeps me informed of local horror events/screenings and projects he’s involved with. his latest endeavor is a low-budget horror feature filmed entirely on iphones entitled DEAD iSLAND, which he co-wrote and is directing.

DEAD iSLAND is being produced by be more films and is scheduled to be completed later this month. from what i’ve seen, i think both the technical and story concepts sound fascinating and i can’t wait to see how this turns out. josh describes it as a cross between two films i love (THE STRANGERS and THE BLAIR WITCH PROJECT), which after watching the trailer, seems pretty accurate. the film is still a work-in-progress at this point so no release date has been set, but i’ve included the synopsis and trailer below. combining my love of the survival horror genre with my geeky tech love of apple’s sexy hand-held is just too tempting a combination to resist, so i’ll definitely be keeping an eye out for the release of DEAD iSLAND. you can read more about DEAD iSLAND, related projects, and see several short films at bemorefilms.com.

Synopsis
Dead Island centers around Kelsey (Emily Fondersmith) and Devon (Charlie Dreizen), 17-year old twins. Their parents have decided to up and move their whole family to an island thousands of miles from their childhood home, right before their senior year in high school. Needless to say the twins aren’t too happy about this move. Tensions are high in their normally tight knit family. This tension is not helped by the twin’s newfound hobby of recording everything about their lives with their camera phones, which are otherwise useless on the island where cell reception is non-existent.

The twins settle into their new high school where they are befriended by one odd girl, Tracy. Tracy is immediately smitten with Devon who is a little put off by Tracy’s advances. After a reluctant trip to the beach with Tracy, the twins return home to a not so friendly welcome. A pair of masked killers invade their house and terrorize the family throughout the night. The killers embrace the fact that the twins film everything after they bust in and take one of the phones, which sets up the rest of the movie to be filmed from both the killer’s perspective and their victim’s.

Just when you think the movie is over and you are wanting more, that’s what you get. Many twists and turns lie in the last several minutes of the movie that will hopefully leave you blown away.