What The Hell Is An Onechanbara?

May 19, 2009
Posted by
Corey
corey@evilontwolegs.com 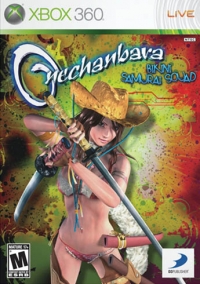 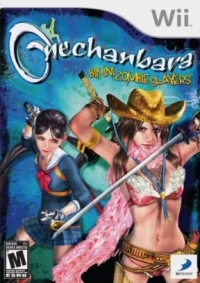 i have no idea what ‘onechanbara’ means, but i definitely have a handle on the next three words that comprise the subtitle of the wii version of this game — bikini zombie slayers. after reading those words and realizing they are part of the title of a video game, there are only two reasonable reactions — 1) you think any game called that must be amazingly stupid and decide you have no interest in it or 2) you stopped reading this sentence long ago to open a new tab and see how much next-day shipping is at ebgames.com and how many copies of onechanbara they have in stock. it’s rare that you can decide whether you want to play a game solely based on the title, but this is one of those times.

two different onechanbara games were released recently, one for the wii and one for the xbox 360. bikini zombie slayers on the wii is technically the sequel to bikini samurai squad on the 360. i hope it’s not ruining the surprise to say that i’m a big fan of these two games, despite all the largely negative reviews. x-play on the g4 channel rated both the xbox 360 onechanbara game and the wii version an impressive one out of five stars. are the onechanbara games really that bad? is something wrong with me that i like them? i think the answer to both those questions is a definitive ‘no,’ because i think these particular negative reviews say more about video game journalism than about the games themselves.

it’s obvious that, as a story-telling medium, video games are still quite immature. game developers don’t seem ready to address mature themes in the same way as other forms of art, likely because game censors and the general public don’t seem ready to accept any attempts (e.g. mass effect, the gta hot coffee silliness). less talked about, though, is the fact that the video game media also has a lot of growing up to do, not just video games themselves. the complexity and diversity of the video game world is equitable to that of film, but video game reviews are typically no where near as sophisticated as those written by film critics.

until fairly recently, jon and i would rate films on a quantitative scale (e.g., five stars). we abandoned this practice because, while it seems natural at first glance, comparing films this way just isn’t always that useful or fair. can you really break down the ‘quality’ of a film into numeric ratings on characteristics like acting, writing, direction, photography, music, etc? is it really fair to compare films like schindler’s list and evil dead 2 on the same scale? both are amazing pieces of art, but they have little in common besides the fact they can be viewed using the same technology. judging these films using the same criteria is a disservice to both.

which brings me to my point — video game journalists, more often than not, judge all games as though they were each an attempt to reach one singular goal. they compare games against the same criteria regardless of the intent or intended audience. just as you can’t judge every film as though it were trying to be schindler’s list, you can’t judge every game as though it were attempting to top gears of war. not every game is a super-high production value project with aspirations of being the game to buy this holiday season. not every game wants to show off cutting edge graphics or max out the number of pixel shaders that can be used to render yet another ridiculously muscled space marine (note: i have no clue what a pixel shader is). sometimes you just want to play peggle. and sometimes you just want to cut up badly rendered zombies with a girl in a bikini brandishing samurai swords.

onechanbara isn’t trying to be the big blockbuster action film of the summer — it’s far more akin to films from the grindhouse era or straight-to-video b-movie releases. it’s a low-budget affair, of that there is no doubt. the enemy a.i. is non-existent, models clip into each other constantly, the few times you get to drive a motorcycle the controls feel like warm mollasses and the menu systems were obviously designed by someone who couldn’t even spell the word ‘usability.’ that said… i don’t really care about all that, and neither did the creators. these games are fun as hell. there is a lot of hidden depth in the item management and controls that most reviews neglect to mention, but yes, all you really need to do in the game is button mash repeatedly to make your scantly-clothed heroine slice zombies up into itty bitty pieces until you get to the next boss fight. what’s wrong with that? that sounds like an action i actually wouldn’t mind doing over and over again. i must have diced 10,000 zombies by now with my dual swords, but i still giggle every. single. time.

these games are pure b-movie cheese, complete with the requisite extreme violence and gratuitous nudity. more time was spent on all the different unlockable clothing options for your multiple heroines than on level design because this isn’t a game about navigating complex mazes — it’s about getting from point a to point b with as little thought and as much fun as possible. i see that simplicity as a big plus, not something to be criticized. while fallout 3 and gears of war sit gathering dust, i throw in the onechanbara games quite often because sometimes i just want to kill zombies… not watch half hour cut scenes or solve intricate puzzles. that isn’t to say there isn’t a place for games that focus on those types of things — just that there’s definitely room for games with other agendas.

i did manage to find one review that truly understood how these games should be played and judged. 1up really seems to get “it.” these are budget titles ($40 on 360, $30 on wii) that share the same ridiculous premise and are meant to be short-lived guilty pleasures and nothing more. that still doesn’t mean these are quality examples of guilty pleasures, but tell me this — how bad can a game which features a boss fight with a zombie whale really be?

if you play either of these games and want to dig deeper into them, you will definitely need the following guides from ign because the books that come with the games are useless.

One Response to What The Hell Is An Onechanbara?