One of the most intriguing packages we’ve ever received at Evil On Two Legs came addressed to Corey Feldman. Of course, there is a Corey who writes for Eo2L, but unfortunately he’s not Fel-dawg. I was even more intrigued when I saw that this package contained a review copy of a new, independent film called Zombeak!. However, I’ve been disappointed more times than I care to recall by independent films that have amateur camera work, poor lighting, cornball dialogue, and little entertainment value. Still, when you’re called upon to review a film in the name of Corey Feldman, you answer that call, mister. And I’m glad I did, because Zombeak! is one of the most original and fun movies I’ve seen all year.

In the film, a gang of Satanists kidnaps Melissa, a sassy southern waitress, to be their dark lord’s sacrificial bride. But they bungle the job so badly that the devil is forced to take the form of a chicken. This might sound like your typical b-grade camp, but the unique and well-acted characters make this film work. The Satanists include a sultry temptress who’s just itching for some demonic loving, a wimpy goth kid whose heart really isn’t in any of this, a flamboyant leader who simply loves the theatrics of it all, and a hairy, muscled behemoth in a pink t-shirt with gender-identity issues and whose motivations are anybody’s guess. The rednecks who rally to rescue Melissa include her boyfriend Bobby Ray who refuses to fight the Satanists because he’s afraid of going to hell “for hitting retards,” the manager of the Cooters fried chicken restaurant where Melissa works, and Bobby Ray’s bible-spewing, head-cracking older brother who commands us all to “worship less chicken, more Jesus.”

You could argue that Zombeak! is a parody of stereotypes or religious fundamentalism, but that’s really beside the point. The film has no pretensions whatsoever. And I love that. And while this film probably isn’t going to scare you, or even gross you out, it is irreverent and quirky. The cast and crew obviously care about the film they’re making, and they have a lot of fun doing so. And all of that translates into a very entertaining 72 minutes.

In fact, I was so impressed by Zombeak!, that I sent some questions to writer/director Sam Drog, who was kind enough to offer his responses below.

Eo2L: Zombeak! is a lot of fun to watch because you so obviously love the horror genre, and it shows in every frame of your film. I could detect the influences of Candy Man, The Evil Dead, and an homage or two to Ed Wood,especially in the Tor-esque character Samuel/Lucy. What other films influenced Zombeak!?

Sam Drog: The big influences on this are John Waters and Mario Bava. I love what both of those guys did with no money, and John Water’s dialogue is just so damn good, and then you mix in Mario Bava for the look. And especially Vascara is a homage to Barbara Steele in Black Sunday. Love me some Bava. When in doubt; rip off Bava. So the Dark Shadows tv soap was also floating around in there, and Roger Corman. But necessity was the real influence. Make something.

I took your film as a kind of parody of religious fanaticism. The evil Satanists turn out to be pushovers, the devil is a chicken, and Fasmagger struck me as a crazy, bible-spewing parody of right-wing fundamentalist. Is that a fair assessment, or am I reading way too much into a movie about a demonic chicken?

Yeah, that is in there, but I tried to keep it locked up in the background. I really wanted the good guys to be fascists and the evil guys to be intellectuals. That is sort of the gist of a lot of movies. There is a bit about belief and how that clouds your humanity sometimes. The evil chicken represents war-torn Europe.

When it comes to chickens, do you prefer dark or light meat? The McChicken or the BK Broiler?

The darkest meat, soaked in the blood of panic! BK Broiler for it was baptized by an inferno of industrial fire! I know, I used to work at Burger King. That is the true hell.

I think Zombeak! is a wonderful testament to low-budget, do-it-yourself film-making. What’s the one thing you’ve learned that you wish you could go back and tell yourself before starting Zombeak!?

Which came first, the story of Zombeak! or its title?

The movie was going to be called Voodoo Chicken at first, but Voodoo ain’t all bad. I figured no one would care if I made fun of Satanists. If Satanists are sensitive about that, well there you go, my point exactly. Go cry on a goat.

Unless I’m sadly mistaken, Zombeak! is not a re-make of an older film. What is your opinion of the seemingly endless stream of horror film remakes?

I suppose the filmmakers that spent their lives in the trenches, sweated and bled over these now classic films ARE getting their piece of the action too. John Carpenter is hilarious because he just comes out and says as long as he gets paid a lot of money, who cares? So if the icons of horror, the Romeros, the Hoopers, and the rest are able to get a pay day where all they have to do is sit back and count their money, I say go for it. They’ve suffered enough. Let them enjoy some restitution for being called hacks their whole lives. Who’s laughing now?

THE FACT THAT ALL THE REMAKES SUCK! is just more proof how with all the money in the world, the big shots in Hollywood can’t recapture that passion, that lightning in the bottle achieved by the outsiders who with nothing went out and created the modern horror genre. I think it is hysterical that with all their toys and bells and whistles can’t make a descent chainsaw maniac movie. There is no do or die in the remakes. In the originals, it was hail Mary passes to keep them from working at the hardware store the rest of their lives. The desperation and discomfort and passion part of the vibe in those films. The remakes don’t have that feeling.

The “Cooters” restaurant is obviously modeled after “Hooters,” but I noticed that Cooters served southern fried chicken and mashed potatoes instead of chicken-wings. What’s up with that?

Our one continuity error, good eye!

Melissa may be a smoking hot “Cooters” waitress, but she’s not your stereotypical dumb blond or coy final girl. She’s strong and sassy and quickly takes charge of the situation. Is her character a deliberate statement about the male-oriented horror genre or its frequent depictions of feminine victimization? Or am I once again reading too much into a film about a possessed chicken?

Girls are smarter then guys, have a higher pain threshold, and look better holding an ax. I modeled her character after Frenchy from Forbidden Zone, who just insulted her captors the entire time. Also Reese Witherspoon from Freeway. Both the women in Zombeak! are much more the catalysts then the guys. Plus, it’s more fun to write one liners for tough chicks.

What is the craziest/funniest/strangest thing to happen during the production of Zombeak!?

The house we shot in was infested with squatters that we had to run out, and then scrape their feces off the floor before shooting. It was strange just being on the set, with the baby heads and upside down crosses everywhere. It was a weird vibe every day. Like walking around in a cartoon. We are cutting together the documentary now. We are releasing it as a series of webisodes called Behind the Beak. Here’s the Youtube channel.

I’m the guy in the green jacket.

What are you working on now?

Clown Versus Monkey, coming in Halloween 2010. I’m preselling the DVD to raise the budget. Check it out! 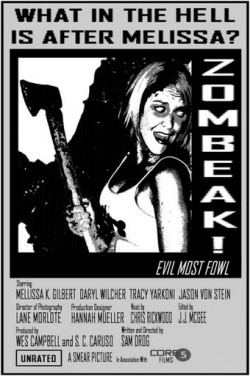 Which is better, Evil Dead 2 or Army of Darkness?

Jason. He is a wall of evil. A force of nature. Freddy is all magic and shit.

BV3D, it had Tom Atkins, it should win Best Picture just for having the good taste to do that.

I’m torn! I really DON’T KNOW! FD3D. Zombie must be punished for remaking Halloween. We shouldn’t encourage him. However, I am looking forward to El Superbeasto.

I’m out of the loop, but the best three movies of ‘08 for me were Doomsday, Dark Knight, and Death Race. ‘Cause I’m all classy like that.