Impressions of a Black Christmas Virgin

With the holiday season upon us, I decided to finally sit down and watch the 1974 classic Black Christmas. Not only did it put me in a Yuletide mood, but now I can cross it off my list of films every horror fan has seen except me. Of course, I’d always heard about this film, so I knew to expect an early version of what would eventually become the modern slasher film. However, there were many surprising aspects of this film that nobody had ever told me about.

1. Lois Lane!
I had no idea that Superman’s best gal is in this film. No offense to Kate Bosworth, but Margot Kidder IS Lois Lane. I was happy to see that what made her work so well as the plucky Daily Planet reporter is also evident in the way she plays the role of sorority gal Barb. She’s hardly the stereotypical airhead, but a foul mouthed, hard drinking, wise cracking woman who was born an old soul. I love the way she’s completely unperturbed, and even slightly amused, by the prank caller. And she has no end of fun with the naïve rookie cop, convincing him that “Fellatio-20880” is the new phone exchange for the sorority house.

2. Surly Women
This is a bad-ass sorority! For one, there’s a poster of an old lady giving the finger hanging on the sorority house wall. Also, the sorority’s den mother is called “Mac,” and she’s just as sassy as Margot Kidder’s Barb. She hides enough liquor throughout the house to drink Dylan Thomas under the table, and even brushes her teeth with whisky. Plus, when a concerned father shows up and complains about the morally unsavory conditions of the sorority house, Mrs. Mac responds by giving him the finger, too. After all, she can’t help it if the girls behave badly. As she so eloquently puts it, “these broads would hump the Leaning Tower of Pizza if they could get up there.”

3. Funny Hats and Fur Coats
I spent very little time around fraternities and sororities in college, so I’m not exactly hip as to what kind of fashion is involved. But I never imagined that sorority girls dressed as Strawberry Shortcake and fraternity boys as Grizzly Adams. Of course, Jess is the gentler, kinder exception to the otherwise hard-bellied nature of this sorority. And perhaps that pink, puffy hat is simply a nod to renaissance fashion. She was Juliet, after all, in Franco Zeferelli’s classic version of Shakespeare’s play. However, unless Chris has just joined the crew of a Nantucket whaling vessel, there is simply no excuse for that abomination of a coat.

4. The Dad from Nightmare on Elm Street
Lieutenant Fuller, it turns out, will show up again as Nancy’s dad in Nightmare, and they’re pretty much the same character. In both films, he’s a rough-around-the-edges, competent town-cop who can’t quite manage to save the day. However, in Black Christmas, he actually stands guard while Jess sleeps. It’s too bad he doesn’t treat Nancy as well in Nightmare. In that film, he ignores her warnings and lies to her about Freddy.

5. Jason and the Amazing Technicolor Hockey Mask
In Black Christmas, we get an early glimpse of what would later become THE iconic slasher apparel. Of course, Jason’s version is toned down, and one can only wonder what would have happened had he picked up this hockey mask instead. He’d still be a methodical killing machine but I bet he’d have just a little more spring in his step. Actually, this hockey mask also looks like the face plate they made Hannibal Lecter wear–had he decided to decorate it for Cinco de Mayo. 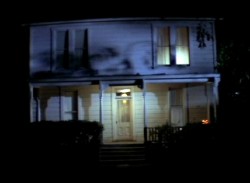 6. The House from Halloween
This film has an uncanny way of predicting the future. First, Nancy’s dad makes and Jason’s mask make their first appearances, and then the film takes place in the Myers house. Well, the sorority house does have a little more bling than the more austere and suburban houses of Haddonfield. But the opening sequence of Black Christmas does look a lot like Halloween. Plus, Billy is a prototype for Michael Myers in that he has lots of bizarre, unresolved issues with Agnes, who I take to be the little girl he murdered years ago. Not to take anything away from a film that is in my top five of all time, but Carpenter basically took Black Christmas, then changed the holiday, moved the setting to a middle-class neighborhood, gave Billy a family, replaced all the fur coats, funny hats, and surly women, and ended up with his masterpiece.

4 Responses to Impressions of a Black Christmas Virgin