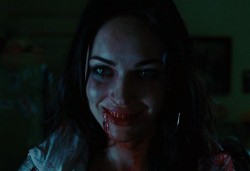 friend of the site, fellow blogger, horrorsquad contributor, highly opinionated goofball and all-around nice guy brad mchargue runs a horror film podcast called dead wrong!. each episode is recorded as a commentary track to a particular horror film, with brad debating the merits of the film with someone of a contrary opinion. past episodes have covered DAWN OF THE DEAD, INSIDE, DOG SOLDIERS, and THE DESCENT — but recently i was invited to participate in a debate covering diablo cody’s recent foray into the horror genre, JENNIFER’S BODY.

those who frequent this site may recall that i named JENNIFER’S BODY my favorite horror film of 2009, so it should come as no surprise that brad is taking the “JENNIFER’S BODY makes me want to a punch a baby in the face” stance, while i attempt to defend it. the movie. not the baby. although, i would, if there were an actual baby. i think it’s metaphorical. anyway — you can hear the episode at ilovehorror.net, horrorsquad or, better yet, subscribe to the entire podcast through itunes (go to advanced/subscribe to podcast).

you could also just download the episode or listen to it below.