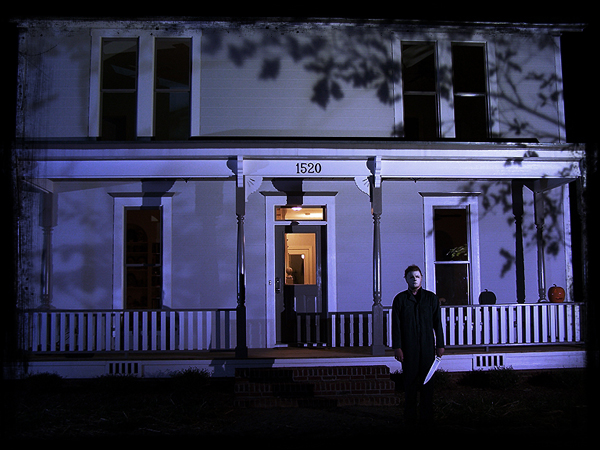 file this under “news of the freakin’ awesome”: some guy far cooler than you or i decided to custom build the myers’ house from HALLOWEEN as his starter home. better yet (if you’re me, anyway), it’s located in hillsborough, nc, which is two hours from my home town and just a few miles from where i went to college.

rebuilding that house and living in it is such a great idea, i can’t believe i never thought of it — but luckily kenny caperton, emily currier and their two cats did. while it’s not an exact replica (a few walls have been moved, it features more modern appliances and better interior decorating), the exterior is damn near exactly what you see in the film, and the interior retains the most significant areas from the film (judith’s room, the staircase, the kitchen, etc.).

you can learn more about the house at myershousenc.com, and you can find kenny on twitter at @myershousenc. he seems open to guests stopping by (but prefers you let him know in advance), and frequently hosts horror-themed events at the house. the biggest of these events is, of course, on october 31st. see the website for details on this year’s halloween bash.

i don’t know if i’ll be able to make it to the halloween get-together this year… but i know i’ll be seeing if it’s ok to drop by the house the next time i’m driving home to nc. if so, i’ll be sure to post lots of pictures and maybe an interview with kenny, who i hereby crown the king of enviable real estate.

One Response to The Myers House, North Carolina