Reasons I’ll Go To The Theater, Even When I Don’t Really Wanna

a couple of days ago, i saw the above tweet from @afterdarkfilms, and i have been thinking about it ever since. there was a time that i loved to go to the movie theater, and something as simple as “a cool poster” would be enough to get me there. but that time is long past… for at least the last ten years, and probably longer, i have been developing a dislike for seeing films theatrically and, as it currently stands, it takes an awful lot to drag me to the theater. i don’t know if this is just me or a trend in modern movie-going, but given the tone of the above tweet, i assume not as many people are shelling out cash for the silver screen experience as studios would like. in order to properly answer @afterdarkfilms‘ tweet, i thought i’d lay out the reasons keeping me away from theaters, as well as list what will get me into a seat, despite my reluctance. 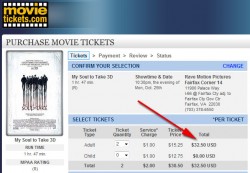 they’re overpriced. this one’s pretty obvious. if you click on the screengrab on the left, that’s the closest theater to me showing MY SOUL TO TAKE. $32.50 to take my wife to see a movie? are you joking? that price is especially ridiculous when you realize the dvd will be out in a few months for half that cost, and not only will i get to keep the film forever — but i get all the special features along with it.

overpriced food. in addition to that $32.50, i’d also have to drop another $20 for a couple of drinks and some popcorn. when did we decide it was ok for movie theaters (and stadiums) to charge us six or seven times the normal cost for food and drinks? no, seriously — when? someone should get a delorean up to 88mph, go back to that moment, and collectively slap us all in the face.

inconvenience. there’s not a whole lot they can do to change this one, but you know — i kind of like deciding for myself when i’m going to start a movie. i also like being able to pause it to go get a drink or go to the bathroom, and not have to shove my butt in someone’s face while inching down the aisle to go do so. unless i really feel like it.

annoying people. sometimes audiences really add to the experience of a film, but more often than not they’re just irritating. whether it’s kids kicking the back of your seat, people talking or someone coming in late, the end result is the same — annoying people doing annoying things pulls you out of the movie. my worst experience with this was during THE RING. a lady two rows in front of me answered her cell phone during the film’s climax and had a loud three minute conversation. every time i see THE RING, i think of that bitch. and i will never, ever forgive her.

the goddamn mpaa. at least when it comes to horror films, this could be my #1 reason for avoiding theaters. why should i pay to see a censored film in the theater when i can see it uncensored on blu-ray cheaper? and it’s not that i so crave sex and gore scenes that missing a few frames of one is inconceivable — it’s that i’m paying to see someone’s artistic vision, and i’d rather not have that vision filtered through a committee of soccer moms who decides what i’m too sensitive to see. there was a time when the mpaa had much more control over the medium, but now with director’s cut and unrated versions being the norm on home video, there’s simply no reason to go watch a watered-down version in the theater.

i never understood why eli roth was so shocked when people didn’t flock to the theater to see HOSTEL 2. he seemed pretty convinced the reason was piracy, but i don’t really think that was it. it might not make a big difference for something mainstream like PARANORMAL ACTIVITY 2, but when you make a film whose primary attraction is shock, gore and terror geared for the hardcore horror audience — that audience isn’t going to go out of their way to see what they know is a diluted version. especially when they know the full experience will be available cheaper and easier in a matter of weeks. HATCHET 2 made a recent attempt at paving the way for the future of theatrical horror — but unfortunately no one got to go see it because they pulled it from screens before anyone could find their effing car keys.

despite all these reasons to not go see horror in the theater, occasionally i still do venture out to the local multiplex. take note movie studios — here are the reasons that i will part with my hard-earned cheddar for your movie, so make sure your film does one of these things. (did i use “cheddar” correctly in that sentence? i heard it used in a song, so i thought i’d give it a go. not sure it’s gonna work for me long-term.)

reasons i will go to a movie theater

three dee. cinema purists seem annoyed by the current 3d craze, but not me, baby. sure it’s gimmicky, but gimmicks need love too. i was blown away by MY BLOODY VALENTINE 3D and PIRANHA 3D, and despite advances in the blue/green glasses technology i can currently use at home, it’s still a pale imitation of the experience you can get in a theater. so, for better or worse (at least until decent 3d is available at home), if your horror film sounds remotely interesting, putting it in 3d is a sure-fire way to get me in a seat.

audience participation. when i refer to audience participation, i’m not really thinking of the ROCKY HORROR PICTURE SHOW variety. there are some films (like PARANORMAL ACTIVITY) that are just better experienced in a packed theater. a lot of the thrill from movies heavy on jump-scares and suspense is feeding off the reactions of those around you… so watching them at home alone is a very different experience. i don’t really need to see THE SOCIAL NETWORK with two hundred people to enjoy it, which is why i’m waiting for it to come to blu-ray; but PARANORMAL ACTIVITY 2? that was actually worth going to the theater for on opening weekend.

i can’t wait. very rarely a film will so pique my interest that waiting a few months to see it isn’t a viable option. due to my own nature, these tend to be franchise films… i will always be first in line to see a new FRIDAY THE 13th or STAR WARS, no matter how bad it looks like it might be. however, at least for me, instances of not being able to wait for blu-ray are becoming more and more rare. i’m not sure whether that means i’m getting more patient or films are getting less interesting but… well, there ya go.

something else i can’t get at home. this is where studios really need to put their energy if multiplexes are going to stay in business. 3d is the big thing right now, but it will not last… if you want people to leave the comforts of their home to see your movie, you have to give them something they can’t get at home. imax is a good example of this, but there’s only so much appeal to making the movie bigger and louder (regardless of how michael bay may feel). things that really draw me to the theater are things like live director q&a sessions after the film (either in person or broadcast by satellite) and tangible free stuff. in terms of the former, i once saw BUBBAH HO-TEP in washington dc with bruce campbell leading a live discussion after the film. that was worth the $10 ticket price, and then some.

in terms of free stuff, i also remember a friend going to see PHANTASM II and coming home with this awesome baseball cap with one of the spheres attached to the brim as though it were eating your brains (i couldn’t find a picture of that hat anywhere, but i can assure you it looked much cooler than the one to the left that came up when i did a google search for “phantasm silver sphere hat”). why don’t more movies do stuff like that? if you’re releasing some mid-budget horror film, give out a goodie bag of info on the film, the people behind it. give away a dvd of short horror films and trailers of other horror films we might like to see. or just throw in a t-shirt or something for god’s sakes.

so yeah, that ended up being a lot longer than i expected. anyway, the quick version of all this is that the theatrical experience of films needs to adapt if it wants to survive. watching a film at home is, in many ways, already a cheaper and better experience than what you get at your local multiplex. if they want to keep people coming to the theater they need to find ways to make the that experience unique and give people something they can’t get at home. something other than irritation and an overpriced experienced based on a bygone era.

3 Responses to Reasons I’ll Go To The Theater, Even When I Don’t Really Wanna