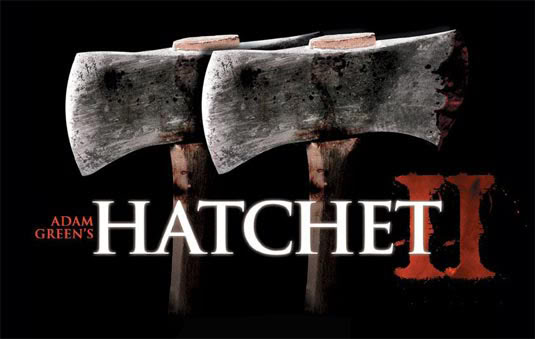 i’ve always had mixed feelings about the original HATCHET, but as time has gone on and especially after hearing adam green’s new commentary on the blu-ray release (where he details his fight with the mpaa and the emotional toll it took on him), i’ve developed quite an appreciation and fondness for it’s over-the-top, largely comedic take on the slasher formula. i was quite excited when i heard it’s sequel would be released unrated theatrically (a bold move for a horror film these days), and was equally disappointed when it was pulled from theaters for still unknown reasons a day or two into its limited theatrical release.

however, there is now some good news on the HATCHET 2 front. the film will be showing up on comcast and time warner’s on-demand streaming services soon, unrated. originally slated for release on the first of december, there has apparently been some delay. but according to the director’s twitter account, the delay is only temporary, and might come with a silver lining.

“Hearing On-Demand pushed Hatchet 2 back just two days (Friday the 3rd) but that there might be wicked good news and reason why! More soon.” ~ @adam_fn_green

One Response to Hatchet 2 On-Demand