One of the scarier aspects of Halloween is the way it suggests that the cozy, white picket fence world of suburbia is not at all safe. Not only is a monster born in an otherwise normal middle-class family, but common household items in the film — kitchen knives, crochet needles and coat hangers – all become deadly weapons. While kitchen knives are actually dangerous, there are plenty of ordinary household items that are perfectly safe, unless they show up in a horror film, where they are guaranteed to cause immense psychological torment or bodily harm to anyone unfortunate enough to be in the same room with them. 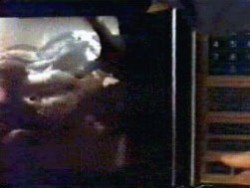 Microwave ovens are not as dangerous as people think. They won’t explode if you accidentally microwave a metal spoon in your bowl of soup. They don’t emit dangerous radiation (they omit non-ionizing radiation, which is different from x-rays or the radioactive fallout that created Godzilla). But if you see a microwave oven in a horror movie, it will inevitably be used to kill something. Gremlins (1984) features a famous example, but microwaves have also been used as weapons in Superstition (1982), Evil Laugh (1988), The Last House on the Left (2009), and the infamously bad Microwave Massacre (1983). 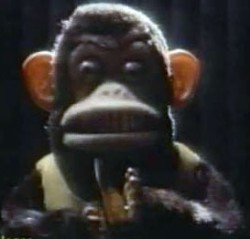 I don’t know who decided that a cymbal clanging monkey would be a good child’s toy. For one, they’re weird and creepy, but more than that, they’re pretty lame, as far as toys go, as they don’t really do that much. But in a horror film, these harmless toys are always the harbinger of death and doom. In The Devil’s Gift (1984), a woman accidentally summons an evil spirit who then inhabits a toy monkey, an idea that some people claim was ripped off from the short story “The Monkey,” by Stephen King. And an evil-looking toy monkey is used in the trailers for Monkey Shines (1988). The movie wasn’t really that scary and featured real monkeys, but the trailer gave me nightmares as a kid. 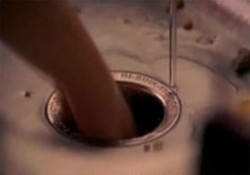 When I was a kid, I lost my beloved Chewbacca action figure to the evil teeth of a garbage disposal. But I’ve never heard of an actual garbage disposal related injury, let alone a fatality involving one. You’re far more likely to injure yourself taking the garbage out the curb. But if you ever see anyone using a garbage disposal in a horror film, there is no doubt at all that someone’s hand will get stuck and severely mauled in it. In Halloween: H20 (1998), Michael Myers uses a garbage disposal to finish off Charlie, who has foolishly stuck his hand down the drain to fish out his corkscrew. Death by garbage disposal is also featured in Amityville 4: The Evil Escapes (1989). 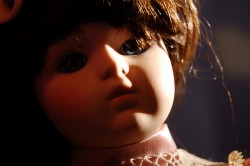 Cymbal clanging monkeys aren’t the only children’s toys to be used in horror films. In fact, any child’s toy you see in a horror movie will likely kill someone. But especially dolls. I suppose they’re inherently spooky because they’re basically dead, or at least inanimate, versions of human beings. And it’s scary when toys become evil because they’re so innocent and intimate. If our own toys turn against us, then it means the world really has become an evil place. The X-Files episode “Chinga,” co-written by Stephen King features a murderous porcelain doll that exerts an evil influence. Evil dolls are also featured in Magic (1978), Puppet Master (1989), Dolls (1985), and, of course, the Child’s Play series. 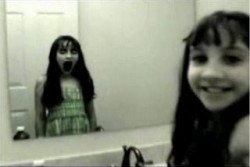 No one has ever died from looking in the mirror, no matter how monstrous your bed head or morning hangover might make you look. And despite the fact that every household in America has a mirror in it, they’re always the gateway to hell or some other nether region in horror films. Of course, legends and folktales about the sinister aspect of mirrors has been around for a very long time, but anyone who looks in one in a horror film is absolutely asking for trouble. Often, they are metaphors for the fact that the world as we think we see and know it is not real or safe, and mirrors offer a glimpse into a darker, distorted reality beyond our everyday existence. For instance, in the one of the first horror films ever made, the J. Searle Dawley version of Frankenstein produced in 1911, the protagonist looks into a mirror and sees his own reflection turn into a monster. And every suspense film in the last thirty years has a scene in which someone closes a bathroom mirror, or looks into a bathroom mirror, to reveal someone standing ominously in the background – An American Werewolf in London is a prime example. Of course, the most famous instance of a horrifying encounter with a mirror is the legend of Bloody Mary which has been scaring the hell out of pre-teens at slumber parties for at least the last 50 years. Versions of it have been used in the television shows The X-Files and Supernatural, and in films such as Candyman (2006). 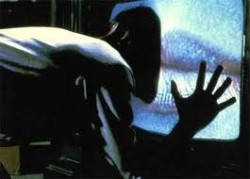 My eyes were glued to the television for the bulk of my adolescence, and I still have 20/20 vision and a life-long love of books, so I don’t think television is as dangerous my parents told me. But if you see a television featured prominently in a horror film, there is a 100 percent chance that someone’s head will be shoved through it, or that something horrifying will come out of it to kill and/or torment everyone in the vicinity of its diabolical glow. My favorite depiction of a killer television is Cronenberg’s 1983 film Videodrome. It’s a serious look at Marshall McLuhan’s famous theories prevalent in the 80s that new technologies, including television, have shaped our sense of reality to the degree that what is “real” now exists in purely mediated forms. Our media, the film suggests, shapes and defines us as much as we shape it. In recent horror films, killer televisions are being replaced with computers, but the message is the same – there’s a dangerous, mysterious “ghost” in our machines that we can’t always predict or govern. But for classic examples of killer televisions check out Poltergeist (1982) and A Nightmare on Elm Street 3: Dream Warriors (1987).