When Food Bites Back

Snakes, tarantulas, and sharks are inherently dangerous and scary, so it’s not surprising that they’re routinely used in horror movies. It also makes perfect sense that less obviously menacing but potentially aggressive animals such as dogs and birds are often cast as monsters. After all, in Greek mythology, the gates of Hell are guarded by a vicious dog, and Ravens are an archetypal bad omen in just about every culture. There are some animals, however, that really have no business being in horror movies because they traditionally belong on our plates.

When a mysterious, milky substance oozes up from the ground, a farmer is bereft to discover that it’s not oil, but decides to feed it to his chickens, which turns them into giant, flesh-eating monsters and, if this plot makes perfect sense to you, then I suggest you seek immediate psychiatric attention. This is undoubtedly one of the strangest movies ever made. If you’re interested in seeing a literal cock fight between man and giant chicken, then look no further. This movie is, however, absolutely worth seeing because it falls into that rare “so incredibly bad it’s good” category in more ways than I can recount here. 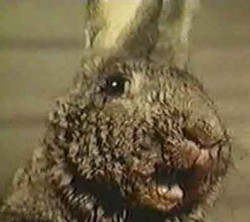 I love this movie more than I probably should. Perhaps it’s because it stars DeForest Kelley from Star Trek, or because I saw it for the first time on TNT’s MonsterVision. Aside from seeing it at your local drive in, this is one of those movies you have to see late at night, preferably with a cheap domestic beer in hand. The moral of the film reflects a truism among environmentalists: there’s a delicate balance in nature that humans have no business messing with. The other moral of the film is that you can’t use extreme close-ups to make cute, lovable, floppy-eared rabbits look horrifying. I also think it’s a disgrace that DeForest Kelley didn’t win an Oscar for keeping a straight face as he bravely fought the evil bunny horde.

1972 was a banner year for eco-themed horror movies. Frogs follows the classic “when nature strikes back” scenario. In this case, a family of drunken, aristocratic southerners have been despoiling the Florida landscape with pesticides, largely because they find the local frogs and toads to be a nuisance and an eyesore that might ruin their upcoming 4th of July celebration. The frogs, however, enlist the help of their animal brethren, including snakes, turtles, and even butterflies in their struggle against their redneck adversaries.

Black Sheep is the Citizen Kane of zombie-sheep movies. While largely a silly, novelty film that makes use of sheep flatulence and allusions to sheep-diddling for its humor, it’s also a surprisingly well-crafted parody of the dangers of genetic engineering. And there is admittedly a kind of subversive genius in turning what is generally regarded as the most docile of farm animals into gory, bloodthirsty killers.

Like Black Sheep, this is also a meditation on the dangers of genetic engineering, but without any trace of campiness or parody at all. The plot involves an experiment to produce more fertile cows that goes horribly awry in a way that such experiments always do in horror movies. The cows began spawning mutated, killer embryos. I know this sounds ridiculous, but Isolation is actually a straightforward horror movie with believable characters, competent directing, and a narrative that will keep you emotionally invested. It’s basically what Aliens would have looked like had the aliens infested a remote Irish dairy farm instead of an off-world colony.