Stuff I’ve Been Watching — The Power of Expectation Edition

while i’m sure we all appreciate the subjective nature of taste, as film connoisseurs i think we often take the stance that our critical opinions of films are based on the sum of some objective evaluation of various identifiable aspects of the filmmaking process and that we judge a film only on what is present on the screen. however, i recently watched two films that really drove home the idea that what i was expecting from a film before seeing it drastically influenced my opinion after viewing it. 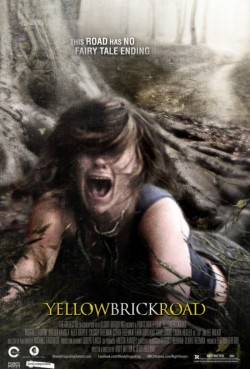 for both of these films, i knew nothing about them other than what i learned from looking at the poster. and YELLOW BRICK ROAD has a really good poster. i don’t know what this girl is flipping out about, but this is fantastic marketing because it makes this film look like it might actually be scary. it’s reminiscent of THE RUINS, but i also got a definite 1970s TEXAS CHAINSAW / LAST HOUSE vibe from it and i was left with the impression that this film was going to be old-school-straight-for-the-balls-that-are-to-the-wall-and-inside-the-pants-that-are-being crapped-in terrifying. i didn’t know whether the threat would be trees, plants, hillbillies or the lollipop guild– and it didn’t matter. i was going to see this film.

and see it i did, but crap my pants i did not. the film starts out well enough, setting up a mystery where an entire town just one day started walking into the woods and died. unfortunately, from there it quickly falls apart, leaving every mystery as mysterious as it was in the first five minutes and padding the time between the opening and the completely unsatisfying climax with scene after scene of useless drivel, philosophical nonsense or, on the rare occasion, one containing a single creepy idea that has some genuine promise that might have been effectively used in another film… but not here. as YELLOW BRICK ROAD stumbled along, leaving a wavy, sporadic trail of crap in its wake like a sick dog, my opinion of the film dropped lower and lower until hitting pretty close to rock bottom as the credits rolled.

that said, when thinking about the film the next day, it occurred to me that a lot of the reason i reacted so negatively to it was because of the promises implicitly made in that poster. had i seen YELLOW BRICK ROAD cold, with no expectations of any kind, i actually think i would have had a much more positive reaction. would i have loved it? probably not. but my “arrrrgggghhhh” reaction of thinking it was probably a 1 out of 5 stars film might very well have been a more reasonable “meh” of 2 or 3 stars had i not been hoping/expecting to love it. we navigate and survive in this world by using incomplete information to make guesses and estimates about how other things in the world are or will be. “will that dog bite me?” “will that car turn left or right?” “will that red berry taste bad?” and yes, “does it seem like that movie will suck?” when the world does not line up with our internal assumptions, the larger that discrepancy is, i think the more powerful our emotional response is and the more we overcompensate by swinging in the opposite direction. 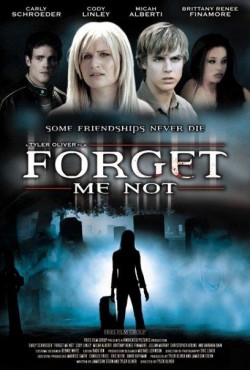 the poster for FORGET ME NOT is uninspired, to say the least. everything about it — the ‘row of heads’ layout, the constipated look on the actor’s faces, the crappy photoshop filter on the title, and even the title itself — they all scream “this is a ultra low budget, made-over-a-weekend piece of garbage with shitty film quality and shittier audio that you’ll turn off five minutes in.” well, believe it or not — it is none of those things.

FORGET ME NOT is actually a fairly competent dead teenager/ghost movie. it’s not going to win any major awards, but the writing is decent, the characters are interesting enough and the ghosts, while highly derivative of several famous j-horror offerings, are genuinely creepy at times. i’d probably give it 3.5 stars out of 5 and recommend it to any serious horror fans looking for something they might have overlooked. however, i’d suggest getting on dvd — at the time i tried to watch it on netflix instant, some of the sound channels were missing (evident in the initial party where everyone is dancing in the background and you can hear dialogue — but no music, which was not an interesting artistic choice as i first thought). although, perhaps netflix has fixed that issue by now.

similar to YELLOW BRICK ROAD though, i wonder what my feeling on this film would be had i seen it completely cold. am i giving it a 3.5 because of its inherent qualities or because its poster led me to believe it’d be a 1? is it possible i would have judged these films of roughly equal quality had i gone in to both of them with no expectations? maybe it wouldn’t have made a huge difference — it’s hard to say not having had that experience, but i have the feeling that my supposedly objective measurement of their quality as films would have been a lot closer had i not seen or formed such strong opinions based on those posters.

if you’re reading this and you haven’t seen these films, then i’ve just given you a very different set of expectations than i had going into them. i wonder how that will effect your judgement of the films, should you see them… if you want to let me know — leave a comment below.