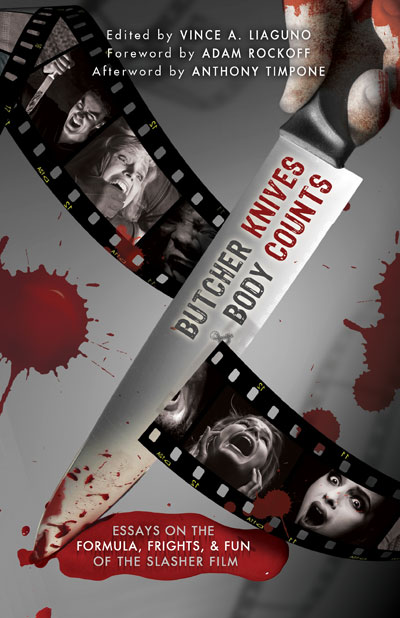 unlike most books on the subject, this is not a simple list of films with rehashed commentary or a straight-forward history — instead it’s a collection of essays from over 70 authors,covering more than 80 films, the sum of which is an incredibly in-depth study and analysis of the slasher genre. given the focus of this site, if you’re a visitor here, that probably means you fall squarely in the cross-hairs of the demographic for this book, so you should probably stop reading and go grab a copy at amazon now. go on, i’ll wait.

as you may remember me mentioning a while back, an essay i wrote about my own personal childhood experience with THE PROWLER was accepted into BUTCHER KNIVES & BODY COUNTS. while my name may not be enough to get you rushing out to the book store, some of the others might (Jack Ketchum, Adam Rockoff, Adam Green, Stacie Ponder, Anthony Timbone… and dozens of others).

editor Vince Liaguno also recently did a 3-part interview about the book for FANGORIA, a small portion of which i’ve excerpted below.

FANG: What went into the process of ordering these films, in terms of their aesthetic and their historical periods?

LIAGUNO: In editing, it gave itself form. Honestly, it just came together. I’d love to take credit for having the brainstorm of putting that full order together, but it really was the way the essays came in, and it just fell into this sequence. I think that’s why I allowed it to grow so big. There was clearly a bunch of films that I could group into something like the Golden Age of Slashers, or a group of essays I could put into the Post-Modern movement.

Then there were a bunch of these oddball essays that didn’t fit into either, almost like if you were going to study a slasher, it would be introductory material. One writer did an article about slashers and their history with video games. Stacie Ponder, who runs the blog Final Girl, did an essay on the novelization of slashers. I just couldn’t stop. We had more theoretical material, equating slashers to different philosophers; some really heavy kind of stuff. When you think about slashers, you usually don’t think about heavy intellectual material. You think about girls in bras and panties getting slaughtered in the woods.

It’s almost 500 pages, which is not the norm for publishing these days. We couldn’t say no. There were so many discoveries, and some of the feedback we’d gotten; somebody wrote me and said, “Thank you so much for not making HALLOWEEN the pinnacle of the book.” HALLOWEEN is only a small part of the book; it gets an essay, but it talks about the music. There were so many other fascinating aspects. One writer, Richard Kane, submitted an essay claiming that THIRTEEN WOMEN [1932], TERROR ABOARD [1933] and THE NINTH GUEST [1934] were really the first slashers. I’m blown away by the way in which people have intellectualized, gone back to those archives of film history and found legitimate cases for the first slasher. Of course, a lot of people argue PSYCHO, Janet Leigh in the shower, is the first. A lot of people argue BLACK CHRISTMAS. But some of these guys go as far back as silent movies.