A Nightmare on Elm Street Blu-ray 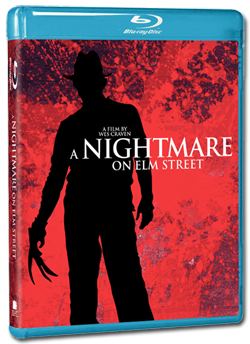 april is a big month for freddy krueger. the remake, starring jackie earle haley, launches at the end of the month (photo of new freddy) and, if that weren’t enough, the original film sees its first blu-ray release tomorrow.

i had a chance to look over the blu-ray this week, and i’d have a hard time not recommending it to fans of the series. the presentation of the film is slick and the picture and sound quality are both excellent. all of the special features from the infinifilm release are reproduced, including the two commentary tracks. the only downside is that there are no new blu-ray specific features — while it’s great that all of the earlier features from the 2006 release have been carried over to the blu-ray, it would have been nice to see something new. if you own the infinifilm 2-disc release, then upgrading might be debatable — but for all others, this is a must-buy.

most hand-held technology is web-enabled these days, so while you’re waiting in line at bestbuy to pick this blu-ray up, why not use your psp, dsi, blackberry, droid, iphone, ipod touch or (if you’re kinda smug) your ipad to check out my old post, A NIGHTMARE ON ELM STREET: 10 pointless observations?