Most Memorable Horror One Liners Part One

I watched the original Predator a few days ago, a film I adored as a kid, but hadn’t seen since then. I was pleasantly surprised by how much I STILL enjoyed it. The characters are outrageous and exaggerated but likable, the story is simple, and the action is well-paced. But it’s the incredible one-liners that make the film so much fun to watch. Inspired, I decided to hold a contest to determine the best and the worst of horror film one-liners. Even though some of these one-liners tried to bribe and flatter their way into my good graces, I assure you I remained objective and scientific in my selections. Stay tuned for part two of this contest, in which I’ll present the cheesiest, creepiest, and most unintentionally funny one-liners in horror.

“Dog will hunt!”
– Chop Top, from The Texas Chainsaw Massacre 2

Arguably one of the most verbal villains in horror, Chop Top’s dialogue is a non-stop series of insane, degenerate, and incredibly catchy one-liners. The band Primus even sampled this particular phrase for their opus “Jerry Was a Race Car Driver.”

“Here’s Johnny!”
– Jack, from The Shining

I love it that this line was already a famous catchphrase long before the film. But it belongs to Jack Torrence now, forever… and ever… and ever. Much like the way “Helter Skelter” belongs to Manson and not the Beatles.

Nearly every line from this movie is memorable (i.e. “let’s head on down into that cellar and carve ourselves a witch”), but it’s this line that stands out in my mind as capturing the tone and tenor of the film and Ash’s resilient nature so perfectly.

“Zombies, man. They creep me out.”
– Paul Kaufman, from Land of the Dead

It’s Dennis Hopper’s delivery of this line that makes it so bad ass. The fact that he says this just as he’s flippantly picking his nose somehow makes his character all the more callous. It’s as if he regards the zombies simply as a personal nuisance that stand in the way of his bigger plans and ambitions. Romero’s recurring theme is that humans are no better than the zombies they fight, and Kaufman’s character makes that message all the more clear.

“I have come here to chew bubblegum and kick ass…and I’m all out of bubblegum.”
– Nada, from They Live

I’ve heard that this line was not part of the film’s script, but was ad-libbed by Rowdy Roddy Piper. This makes sense, as I can’t imagine any screenwriter, no matter how tough, coming up with something so unbelievably bad ass.

“I ain’t got time to bleed.”
– Blain, from Predator 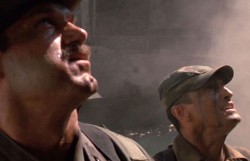 The original Predator is so freaking macho that when I watched this as a kid, I’m pretty sure I had to shave the next day. This famous quote from that film should be included in every dictionary under the phrase “bad ass.”

“Send… more… paramedics.”
– zombie, from The Return of the Living Dead

“Psychos do not explode when sunlight hits them, I don’t give a fuck how crazy they are.”
– Seth Gecko, from From Dusk Till Dawn.

This film is mostly a long series of one-liners, but this one still makes me laugh every time I hear it. It also perfectly defines Seth’s calculated coolness.

“I’m not great at farewells, so, uh… that’ll do, pig.”
– Tallahassee, from Zombieland 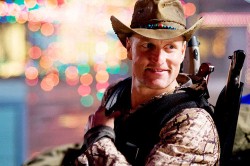 I love the way this film combines horror and gore with humor and sentiment. This quote perfectly captures the awkward and strange but ultimately endearing relationship between Tallahassee and Columbus.

One Response to Most Memorable Horror One Liners Part One