In part one of this contest, I presented the catchiest, funniest, and most all-around bad ass one liners in horror. In part two, things get a little stranger….

“I’m not going to let Simon hurt ya. Why should he have all the fun?”
– Simon, from Simon Says

One thing is for certain about this very odd movie – Crispin Glover throws himself into the title role with all the reckless, crazy-ass abandon he can muster. His version of a southern accent makes this one-liner downright hi-larious. It’s as if Jed Clampett or one of the characters from Hee Haw has suffered brain damage, developed a speech impediment, and gone crazy.

“Get to the CHOPPA!”
– Dutch, from Predator

Half the dialogue of any given action film consists of lines like this (e.g., “come on!” or “let’s go!”), but this is another line that still cracks me up twenty years after hearing it for the first time. I think it’s because Arnold is so serious, so earnest in his delivery. He may not have intended it, but it’s pure comedic genius. 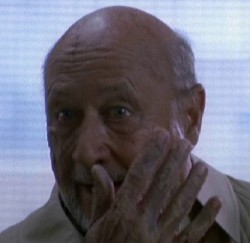 It should be obvious that I love this quote. Loomis’ hysterical hyperbole always strikes my funny bone in ways I don’t think he intended.

“One of us! Gooble gobble, gooble gobble! We accept her!”
– The freaks, from Freaks

Todd Browning’s 1932 classic is still one of the most unsettling films I’ve ever seen. He uses real sideshow freaks and spends the first half of the film making them seem entirely sympathetic and “normal.” And then he brilliantly undermines all of that in the bizarre ceremony scene in which the freaks accept the beautiful, and now horrified, Cleopatra into their secret community. Plus, the phrase is freaky enough to be used by the Ramones in “Pinhead,” and that’s good enough for me.

“A boy’s best friend is his mother.”
– Norman Bates, from Psycho

This quote is especially creepy given Norman’s particular relationship with his mother’s corpse, but any way you slice it, it’s just not something a normal fella ought to say, especially when he’s trying to impress a girl.

“It rubs the lotion on its skin, or else it gets the hose again.”
– Jame “Buffalo Bill” Gumb, from The Silence of the Lambs

The way he uses “it” as a personal pronoun, and the way he says this in nearly perfect lines of iambic tetrameter make it clear that Bill may be crazy, but he’s the Shakespeare of creepy phrasing.

“Listen to them. Children of the night. What music they make.”
– Count Dracula, from Dracula

Bela Lugosi is the gold standard of vampires. Lugosi plays the part with an interesting sense of decadence and dandyism, but this line always strikes me as particularly flamboyant. And if Lugosi’s delivery is cheesy, then Gary Oldman’s delivery of this line 60 years later with that weird accent of his is the mucho-nacho-cheesiest.

“Going my way?”
– The Djinn, from Wishmaster

I’m pretty sure Mae West used this as a daring, sexy catchphrase in the 1940s. Why anyone would include this in a film half a century later is beyond me. It’s like saying “we’re not in Kansas anymore” (which was actually used in Avatar). People, seriously, stop it!

“Welcome to prime time, bitch!”
– Freddy, from A Nightmare on Elm Street 3

The original line was supposed to be “You’re on TV now, girl,” so Englund’s improvisation is a definite improvement. Still, it’s a really goofy thing for anybody to say, especially for a killer who’s supposed to be adept at psychological terror.