The Crazy Old Kooks of Horror

When it comes to character types in horror films, the final girls and their assorted sidekicks get most of the attention. But what would horror films be without the ubiquitous crazy old kook? Without them we’d all be DOOMED, I tell you, DOOMED! Here’s a list of my favorites. 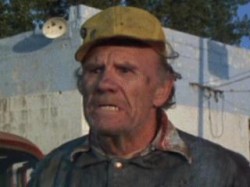 Mr. Diehl, from The Children of the Corn

Aside from running the world’s worst gas station, Mr. Diehl’s purpose in this film is to warn Burt and Vicki to stay the hell away from Gatlin in the most cranky way possible. And the fact that he has no gas at his gas station, or telephone, and won’t let them use his restroom, is a clear signal that Burt and Vicki will be on their own for the rest of the film. As the last surviving adult in the area, his death symbolizes the end of any morality or normalcy that once governed the children. His death, in other words, means that the already freaky children of Gatlin are about to get a lot freakier.

Memorable quote: “Well, folks in Gatlin’s got a religion. They don’t like outsiders, and they probably don’t have a phone there either.” 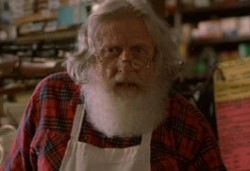 Cabin Fever is a strange but enjoyable mash-up of about every genre of horror and exploitation film you could think of. It feels like a slasher film (even though it’s not) in part because of the presence of Old Man Cadwell and his cohort of locals who harangue the kids partying in their woods. Cadwell is actually rather likable with his strange elfish voice, Santa Claus beard, and hillbilly-style hospitality. Still, his friendly nature is probably a thin veil for something more sinister, and it gives the film an appropriate sense of tension early on. After all, he appears to be a racist, he’s selling guns in his general store, and he seems a little detached from reality. Plus, he and his cohorts look like they know they’re way around a lynching. His main purpose in the film, however, is to provide it with a subversive sense of humor. I won’t spoil the punch line here, but the entire film is sandwiched between a bizarre joke that challenges his redneck stereotype. He is also kind enough to warn the kids about the perils of spilling the bottles of fox urine for sell in his store.

Memorable quote: “Oh Lord, don’t drop that! If you do, that’s powerful stuff! All the foxes around would come down here. You’d have friends like you’d never had before.” 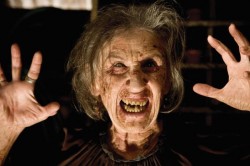 Sylvia Ganush, from Drag Me to Hell

Typically, the crazy old kook in a horror film tries to warn those who refuse to listen or take their warning seriously. Other times, they provide the film with a sense of local color or sinister atmosphere. Sylvia’s character is a deliberate subversion of all that. She’s reminiscent of the classic Gypsy in films such as Dracula or Wolf Man. In those films, a wise and powerful Gypsy offers guidance and protection to the film’s protagonist. In this film, Sylvia symbolizes old-world beliefs and values in a cynical modern world, and she’ll have her revenge against those who won’t respect her. In doing so, she proves that crazy old kooks can be just as deadly as any monster or masked slasher.

Memorable quote: “I beg and you shame me?” 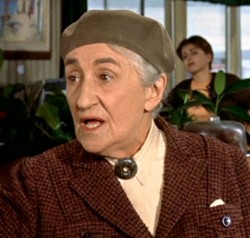 Mrs. Bundy, from The Birds

My favorite Hitchcock film actually has two crazy old kooks. The first is the town drunk who performs the time-honored old kook role of being the herald of doom as he drunkenly proclaims that it’s “the end of the world” throughout the film. But the more important kook is Mrs. Bundy, an amateur ornithologist. I’ve always taken her androgynous appearance to be a symbolic contrast to the more glamorous and sexualized Melanie Daniels. But more than that, she is the voice of reason in world gone crazy, and reminds everyone who’ll listen that the local birds are not capable of conspiring in an organized attack against the town. Unfortunately for the town, but fortunately for film history, she’s wrong about all that.

Memorable quote: “I have never known birds of different species to flock together. The very concept is unimaginable. Why, if that happened, we wouldn’t stand a chance! How could we possibly hope to fight them?” 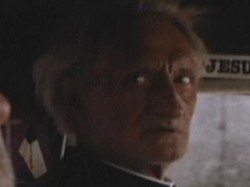 If you were to combine Captain Ahab, Jerry Falwell, and Otis the town drunk, you’d have a pretty close approximation of Reverend Sayer. Like any self-respecting kook, Sayer takes his religion very seriously, and he’s determined to cleanse the world of a rather vaguely defined evil he’s been chasing for years. He was probably a competent minister at one point, especially given the fact that he provides Dr. Loomis with solace and a much-needed morale boost. But Sayer is also tormented by his own personal demons that all the whiskey in heaven or earth will never drown.

Memorable quote: “I’ve been huntin’ the bastard for 30 years, give or take. Come close a time or two. Too damn close! You can’t kill damnation, Mister. It don’t die like a man dies!” 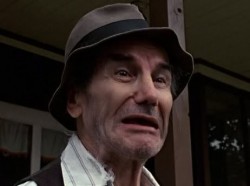 Crazy Ralph, from Friday the 13th

Crazy Ralph is the cloth from which all other crazy old kooks are cut. He’s got all the classic attributes. He’s bonkers and claims that God has given him a special mission to warn everyone about Camp Crystal Lake and its “death curse.” He’s eccentric and rides around on an dilapidated blue bicycle. He’s as ornery as they come and seems to especially dislike teenagers. If you want to get all fancy about it, you could argue that he symbolizes the failures of a rational, adult world that can’t protect or connect with the youngsters in the film.

One Response to The Crazy Old Kooks of Horror