The Final Word(s) in Horror

Whether it’s a harrowing death-bed confession or simply a final shout before the big finale, someone’s last utterance speaks to that most intimate and terrifying moment that Shakespeare calls “the undiscovered country.” It also tells you something about the person. On his deathbed, the writer James Joyce spoke to his frustrations as an avant-garde novelist years ahead of his time when he asked “Does nobody understand?” And the fact that Timothy Leary said “Why not?” before dying speaks to his intrepid curiosity. It is in this spirit that I present some of my favorite dying words in horror films. 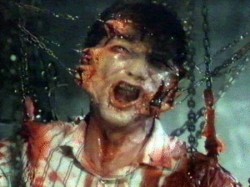 Just before he’s ripped in half by demonic chains, Frank quotes the shortest sentence in the Bible in a way that suggests he’s finally learned its unsettling secret. Being in tune with our spirituality isn’t always a pleasant experience involving clouds and chubby angels with harps. Religion is strange and scary. But if we’re brave enough to embrace it, our pain can be enlightening, and even pleasurable. 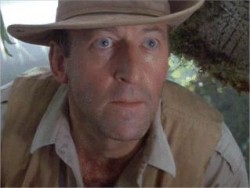 Everything about his final words attest to the fact that this man was a genuine badass. He keeps his cool, even though he knows he’s about to become raptor-chow. Plus, he’s man enough to admit that he’s been out-smarted, and even admires the cunning of his predator. It’s also a statement about the film as a whole and speaks to the fact that they’ve just upset the natural order of things in a way that wasn’t at all clever or wise. 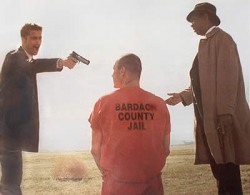 John Doe is the psycho-killer from whose cloth all other psycho-killers after him are cut. Even though the lines have perhaps become a little cheesy after 15 years, they made me jump out of my seat when I saw this film in 1995. These lines are unique, I think, in that they serve so many different roles: they are a confession, a sermon, and John Doe’s bizarre method of suicide. 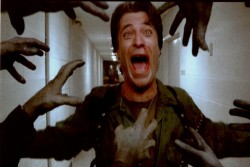 Rhodes is the undeniable antagonist of the film, but his modus operandi is much like any commander in a hostile, occupational setting: minimize casualties in his own ranks, maintain order, oppress the “locals,” and do so in as cruel and callous a fashion as possible. Of course, the oppressed zombies stage an uprising and have their revenge on Rhodes by devouring his intestines. As they do so, Rhodes, defiant as ever, gives his last command to “choke on ‘em.” 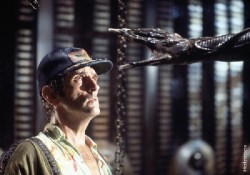 I’ve always loved Brett’s character. He’s not the sharpest tool in the ship’s shed and seems content to follow the lead of his buddy Parker. But he’s a good-natured, working-class kind of guy. I love the way the innocence of his last words are juxtaposed by the appearance of the now fully-grown alien. It suggests that he was simply unprepared to handle the real scale and magnitude of the alien’s threat to the ship and crew.

“Ok, but you have to take this recipe to the grave.”
~ J.T. Hague, in Planet Terror

I love EVERYTHING about this movie. Every frame of it is calculated to generate as much stylized, bad-ass cool as possible. I love the fact that J.T. and his brother continue their long-standing family quarrel over J.T.’s Texas barbecue in the middle of a zombie apocalypse. Even when dying of his wounds, J.T. maintains his defiant demeanor and sense of humor by offering to at long last give his brother the recipe just before they blow themselves up in order for everyone else to safely escape.

5 Responses to The Final Word(s) in Horror