Films That Defined My Childhood 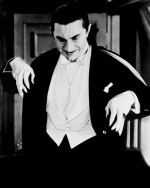 1. Dracula (1931)
When I was five years old, the Book Mobile came to my elementary school every other month or so. I couldn’t yet read anything more advanced than “Run Spot Run,” so I never got all that excited about it, until one day I noticed this big, glossy book with lots of photos and movie stills from what I later came to know as classic Universal horror films. I gave up my ice-cream money for that book, and pretty much wore the thing out. I loved the pictures of the The Fly, The Mummy, and The Wolfman, but it was Bela Lugosi’s Dracula that hooked me more than the others. Of course, I couldn’t articulate why I was so interested in his character, but I think it was his combination of menace and sophistication, animal ferocity and cultivation. As a kid, it gave me a whole new way to think about the monsters that I thought lurked beneath my bed. Even though I begged them, my parents never did let me actually watch Browning’s Dracula until I was much older, but Bela Lugosi’s strange portrayal captivated my childhood imagination for years. 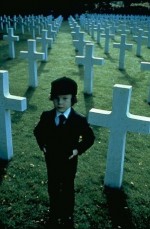 2. The Omen (1976)
I was around ten years old when this film started making its way into the movie of the week circuit, and one weekend I stayed up late and sneaked into my parent’s basement to watch it. I remember thinking the story was a little boring and hard to follow, until I realized that the kid in the film was not human, and this his parents were probably going to have to kill him. As an adult, I really don’t care for this film, but as a kid, it was shocking to think about the fact that the relationship between children and adults can be violent and antagonistic. And I can distinctly remember spending hours the next day in front of the bathroom mirror looking for a 666 birth-mark hidden deep in my scalp.

3. The Shining (1980)
I grew up in a rural town, so it was a really big deal when we finally got cable one summer. As part of a promotional package, we got two free weeks of Showtime, which I pretty much watched non-stop. Most of the time, I’d gather the neighborhood boys to watch Emmanuel, but one day in the middle of the week I decided to watch The Shining by myself. It might have been the creepy music, the claustrophobic setting, the story’s uncanny blend of real-life and supernatural threats, or the fact that much of the film is from Danny’s point-of-view, but The Shining effed me up like no film ever has, or likely ever will again. Even though this film scarred my fragile adolescent psyche, it had at least one positive effect. For the rest of the summer, I dreaded being inside or in any kind of confined space, so I spent most of my remaining free time learning to play baseball. It turned out to be a pretty good summer. Still, like Danny’s insatiable curiosity to peak behind door #237, I knew I’d never get rid of my new-found need to see if the next horror film would scare me as badly as The Shining. 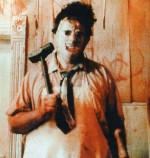 4. The Texas Chainsaw Massacre (1974)
Around the age of thirteen, I discovered slashers and rented every one of them I could find at the local video store. I came to love all that low-budget gore, cheesy dialogue, and lurid stories about relentless killers and intrepid teenage survivors. And then I rented The Texas Chainsaw Massacre. It was unlike any slasher I had ever seen. It didn’t follow any of the conventions, and it didn’t even seem like a movie at all, but an hour and twenty minutes of raw, uncut screaming and brutality. I didn’t have enough savvy at the time to understand that Hooper used a deliberate “documentary” aesthetic to give the film a kind of gritty naturalism. But I did learn that when it comes to horror films, the rules of conventional story-telling or standard decency don’t always apply, and that no other genre of film could be more thrilling.

5. Return of the Living Dead (1985)
As a teenager, I learned so many things from this film. First, I learned that zombie films aren’t just gory social commentary about our own inhumanity, but can be smart, funny, and provocative, all at the same time. Second, I learned that punk rockers have the coolest nicknames, i.e., Trash, Scuz, Spider, and Suicide. Third, I learned that no matter how much I would come to hate my after-school job as a bag boy, it couldn’t get any worse than Freddy’s first day on the job at the Uneeda Medical Supply Company. And finally, I learned that 1985 was THE year that defined the zeitgeist of that decade, but NOT because of The Breakfast Club. For me, the 80s will always be best defined by The Return of the Living Dead. In fact, this film is unique to this list in that none of the above films still scare me like they did when I was a kid, but this one takes me right back to 1985 and still entertains me every single time I watch it.

One Response to Films That Defined My Childhood