Where Sequels Go To Die

Even the most illustrious horror franchise sometimes run out of ideas, and when they do, there’s apparently a rule in Hollywood that you must set your next sequel in either A) outer space or B) the Old West. I’ll admit that if they ever set a Jaws sequel in the Old West, I’d be pretty into it. And space is the place when it comes to scary ghost stories (i.e. Solaris and Event Horizon). Still, taking a sequel to either of these locales is a sure sign the franchise is scraping the bottom of the creative barrel. Here are a few choice examples. 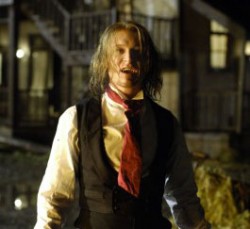 1. BloodRayne II: Deliverance (2007)
The fact that it’s based on a video game, features a vampiric Billy the Kid, and that it’s directed by Uwe Boll are all really good signs that this film is going to suck. It’s not that you can’t mix vampires and cowboys, or that you can’t alter the image of the West’s most infamous outlaw. I love the way Kris Kristofferson plays Billy as a subversive folk hero in Sam Pekinpah’s version of Billy the Kid. I even liked the way Emilio Estevez infused the western legend with a contemporary street-gang ethos. But depicting Billy as the vampire king of a horde of undead cowboys just doesn’t work. Many bad sequels will use their time in space or the Old West to reflect and gain new perspective before returning to the present. Some sequels, such as this one, should stay there and never come back. 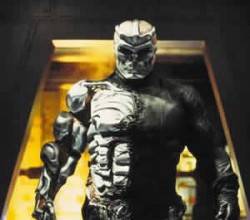 2. Jason X (2001)
By the time we got to Jason X, it was clear that the franchise had run out of ideas. Jason had died and been re-animated countless times. He’d been to Manhattan, and he’d been to Hell. So the only thing left was to take him to space. It’s a silly premise, but it kind of works. In particular, the virtual simulation of Crystal Lake is a lot of fun to watch. Ultimately, Jason is a terrestrial creature, but his quick orbit in space did give the franchise a little more breathing room. 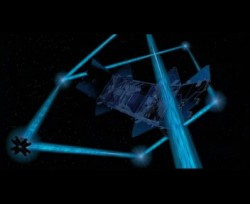 3. Hellraiser 4: Bloodline (1996)
My favorite review ofHellraiser: Bloodline puts it this way: “In space, um, no one, um, nevermind.” The film begins in 2127, with flashforwards within flashbacks, and it features things like a giant, laser beam shooting space station called the “Elysium Configuration.” Esoteric would be the academic term for it. Confusing as all hell is probably a better descriptor. Hardcore fans of the franchise like this film because it ties everything together and explains the origins of the various “Configurations.” I find it odd that it took launching Pinhead into orbit to explain it all, but so be it. Call me old-fashioned, but I think the franchise was far better off in that creepy attic from the first installment. Hellraiser 4 did mark the end, in a way, of the franchise, as the rest of the sequels were direct-to-dvd. 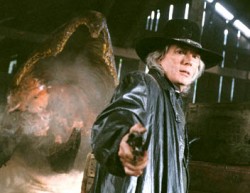 4. Tremors 4: The Legend Begins (2004)
Just as it’s a sign that a franchise is in trouble when it moves to the Old West, it’s also a bad sign when a franchise resorts to “origin” stories. In particular, I’m thinking of films such as the altogether lackluster X-Men Origins: Wolverine, but even good films such as Casino Royale prove that the franchise desperately needed the reboot. Tremors 4 in no way lives up to the original, but it isn’t all that bad, and the Old West background makes far more sense and is far more believable than, say, a film that features a Leprechaun in outer space. 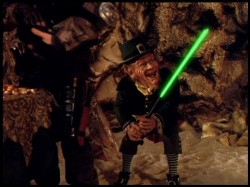 5. Leprechaun 4: In Space (1997)
A small part of me admires a franchise that so blatantly and recklessly uses every gimmick in the book—a novelty villain, a “bride of” sequel, a Vegas setting, and then the little green bastard is launched into space. And he should have stayed there, out of harm’s way in lunar orbit, or in a fiery trajectory into the heart of the sun, but in the next sequel, he’s back on earth and in “the hood,”and then in the hood again in that film’s follow up. Being a native and resident of the Appalachian mountains, I am a little bit insulted that we haven’t yet seen a Hillbilly Leprechaun.