a common criticism of the slasher is that it is formulaic. take a group of kids and have them hunted and killed by a psycho. at the end, the least slutty of the kids fights back, then escapes and/or kills the monster. fade to black. yes, it’s a simple formula — but it’s also a formula that works. when dealing with a slasher film franchise, every sequel brings a little something new to the table by tweaking the formula slightly (e.g., picking a new location like new york or outer space, throwing in a psychic, etc.), but overall the idea stays the same. usually.

every once in a while a director or producer gets control of a franchise and decides to shake things up by trying something drastically original. this rarely ends well. below are my personal picks for the biggest “wtf?” slasher sequels that left fans scratching their heads and bewildered when walking to their cars from the theater. normally when i make these lists, the order is irrelevant — but here i’ve actually ranked them from the smallest wtf? to the biggest wtf?, based on how loud i yelled the phrase once the credits rolled. 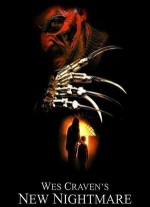 this actually isn’t that bad of an entry in the NIGHTMARE series, but boy is it odd. more meta than meta, this film turns the camera around, blurring the line between fiction and reality by taking place in world where a guy named wes craven wrote and directed the original A NIGHTMARE ON ELM STREET. the film follows the original cast/crew of the first film, as the world’s knowledge and fear of freddy krueger is actually bringing his fictional character into our world, and he’s targeting his creators. for the most part, the idea of a demon stalking people in their dreams remains intact, so this film elicited a rather meager “wtf?” from me at its conclusion, but those who went in without much knowledge of ELM STREET‘s imdb page and were expecting a more traditional freddy krueger film were probably far more perplexed. 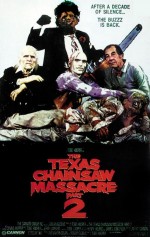 the original TEXAS CHAINSAW MASSACRE has its moments of dark comedy, but most audiences missed them due to being in shock from the overwhelming terror they had experienced from the film’s other 82.5 minutes. it also featured a surprising restraint in the gore department, showing very little on-screen violence and almost no blood — which didn’t lessen the impact of the film in the slightest (and may have actually heightened it). its sequel, released 12 years later, confused audiences by pretty much reversing everything i just said about the original. while the basic idea of a family killing and eating people remains intact, very little of the horror does. TEXAS CHAINSAW 2 is, in many ways, more of an action/adventure film than horror, with copious amounts of dark humor and political allegory thrown in for good measure. it also features some of the most over-the-top gore ever recorded on film, thanks to the work of tom savini. like most, i now love TEXAS CHAINSAW 2 as much as the original, but it took many years for that appreciation to grow because of the huge divide in tone and intent of the two films. 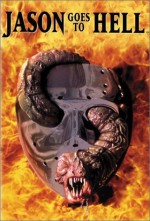 regardless of what you call it (JASON GOES TO HELL, FRIDAY THE 13th PART 9, THE FINAL FRIDAY, etc.), this film kinda sucks. it has its moments (e.g., creighton duke describing what he thinks of when he hears the name “jason voorhees” and the tent kill), but largely this is just a big ‘ol turd. the primary reason for this is that when you go to see a FRIDAY THE 13th film, you’re expecting to see jason. particularly when the effing title of the film starts with his name. instead, what we received was a jason-as-the-bread sandwich, with 3 minutes of jason at the beginning, another 3 minutes at the end, filled in the middle with 85 minutes of a body-hopping demon slug. i understand cunningham wanted to take the series in a new direction, but he really needed to choose a different one. because there is nothing down the road in that particular direction other than tears, pain and disappointment. 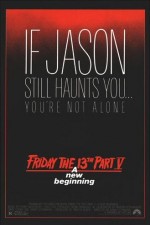 perhaps the impact of the ninth FRIDAY THE 13th sequel was lessened because the series had already faced an even bigger “wtf?” moment years earlier with part five. to be fair, the subtitle does tell you right there, straight up, we’re beginning something kinda new here. what it doesn’t mention is that “something kinda new” equates to “something kinda shitty.” just look at the poster. it’s just words, and the biggest word of all on it is “JASON.” a reasonable person might think that implies that jason is featured prominently in the film… well, that reasonable person isn’t really as reasonable as you thought because they would be wrong. instead of the big triumphant return of jason voorhees, the big climax is the reveal that the killer is some guy named roy. roy, an extra who appeared in the film 80 minutes ago, who you probably don’t even remember and whose motivation doesn’t really make much sense. yeah, it was stupid in 1985 and it’s stupid now and, in all likelihood, it will be stupid for an indefinite time into the future. the producers got it right with the next sequel, by informing audiences right away in the title that “jason lives.” because i doubt they would have lined up around the block for FRIDAY THE 13th PART 6: ROY RETURNS. 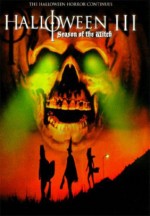 now we’re to the big kahuna, the largest “wtf?” slasher film of them all. this one really bucks tradition because while the other four can at least be categorized roughly as “slasher films,” HALLOWEEN 3 cannot. it has something to do with robots and stonehenge and tom atkins screaming a lot (which is always fun to watch), but it has absolutely nothing to do with a guy in a white mask stabbing people. which, as i recall, was a pretty big part of HALLOWEEN and HALLOWEEN 2. this film has a cult following and actually isn’t that bad — but it should have been titled STONEHENGE DEATH BOTS or something, NOT HALLOWEEN 3. likely due to its financial performance, the studio learned its lesson and eventually released HALLOWEEN 4: THE RETURN OF MICHAEL MYERS, which is roughly the same thing as titling it HALLOWEEN 4: SORRY ABOUT THAT LAST CRAP-FEST, HERE’S WHAT YOU WERE LOOKING FOR. if you couldn’t read or were so traumatized by part three that you’d forgotten his name, they also put michael’s head on the poster so there’d be no ambiguity. it filled about 120% of the frame.